Share
Claire has been so close to rolling for a couple of weeks now, and two nights ago she rolled from back to belly, and than to her back again! She wouldn't repeat the roll for her dad then, but by today she's rolling from back to belly all the time. She's only working on rolling in one direction, so we're working on the other way now, and working on getting from belly to back. Once she makes it to her belly she gets mad.  It's so much fun to have her doing new things, but it also means she's getting so big! 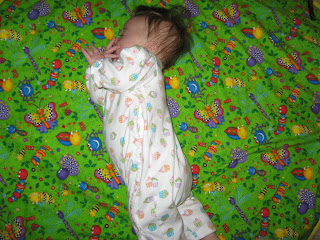 Claire has been really talkative lately.  She's babbled and cooed to us for a while, but now she has started talking to her toys too.  The toys on her swing and car seat get quite an earful!  I love hearing all her noises.
Lots of people keep asking about surgery updates, and unfortunately I don't know anything more right now.  We were supposed to go to cardiology in 2 weeks, but I've bumped Claire's appointment up to next week, as her coloring hasn't been quite as good lately. Right now it looks it will be May to the beginning of June.  This is the same time frame as Jake's wedding, so we are trying to make both work.  Jake should get his orders soon, and depending on where he is stationed and his leave, and that will help with the timing of everything.
Posted by Melissa at 9:08 AM