Share
Today was one of those days that I am just glad is over...I'm tired and frustrated and so ready to go home. I know things will be better tomorrow, but I'm tired of crying today.

My day started by running into the R word on a book blog that I frequent. It was a picture that was a parody of the inspirational posters you see a lot in offices. I emailed the gal and told her I thought her post was in poor taste and hurtful. She removed the post and we ended up having a great email conversation, but it just kind of set the tone for my day.

Darren is still sick. This morning he was running a fever and I told him he needed to get to the dr. They said it's just a virus and gave him some cough medicine to help him feel better. He's staying home again tomorrow to hopefully feel better. He hasn't really been to the hospital since Claire has been here since he's sick, which I totally agree with, but it also means that I don't get much of a break. I know the nurses keep an eye on her, but I really hate to go too far in case she needs me. This makes me awfully thankful that I'm not a single mother.

On the daycare front, I got a text from our gal that she isn't going to be able to watch Claire after all. She has some liver issues and got sick a couple of weeks ago. Her dr advised her to take it easy so she doesn't get sick again. I know she needs to do what's best for her, and if she's not healthy I don't want her around my baby, but it just puts me in a bad spot since I was supposed to start back to work this week. 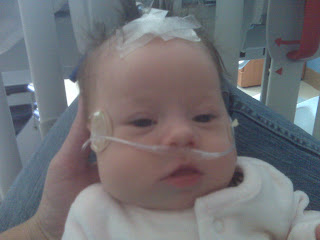 On the good side, I think Claire is finally feeling a little better. She is still breathing hard and her cough sounds terrible, but she was awake more today and actually quite smiley. She also has this adorable habit of sighing while she eats, and she was sighing again today. She hasn't lost much weight since she's been in the hospital and is up to 8 lb, 10 oz! I am still hopeful she might be released tomorrow. I tried to get a picture of her smile, but she wouldn't cooperate.
Posted by Melissa at 10:51 PM