Share
Today was Claire's annual eye check.  These are fast becoming my favorite appointments!  The doctor looked her over and gave her a great report.  There is no sign of nystagnus.  She is still far sighted, but doesn't need glasses as this time.  The doctor said to watch for her eyes crossing, as that can happen when you are far sighted, but that there is no sign of that at this time.

While we were there I had the doctor take a quick peek in Bridget's eyes.  When she was born she had two red spots in one eye.  I was told they were broken blood vessels from being born and that they would heal and go away.  One of the spots did disappear, but almost six months later the other one is still there.  He said that the spot in her eye could be a couple of things.  The first option is a nevus, which is a freckle or mole in the eye. The doctor said that if this is what it is, it may not become pigmented until later.  The second option is a hemangioma, which is a collection of blood vessels.  If it's a hemangioma, it may just break up and go away on it's own, and they usually don't do any treatment unless it starts changing or interfering with her vision.  The doctor wasn't concerned so for now we will just watch her. 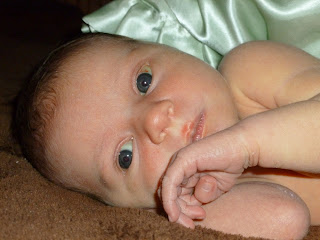 This picture shows the spot that healed and went away, but the spot she has now didn't show up in these pictures.  I'm not sure if it's gotten bigger/darker, or if it just didn't show up because it's on the inside of her eye.
Posted by Melissa at 5:05 PM