It's still Friday, but just barely...

We had a pretty laid back birthday party for Claire.  Just pizza, cupcakes and us.  As much as Claire loved her cake last year, she was completely uninterested in it this year.  She wouldn't even take a bite, just smooshed the frosting in her hand, and then wanted a napkin.  It's official, she has her dad's nonexistent sweet tooth.

We had our 3D ultrasound a couple of weeks ago.  It really was the strangest appointment ever.  With Claire, every ultrasound we had was checking on her, checking fluid, checking blood flow through the cord, etc.  This appointment was just for fun.  No measurements, just pictures of Bob (that's what my belly/baby combo has been named, and no, we aren't really naming him/her Bob).  The one thing the tech did say was that this baby has a lot of hair too!

Darren and Claire are gone this weekend.  Instead of something fun, it's going to be me and the computer all weekend, getting our taxes done.  Blech! 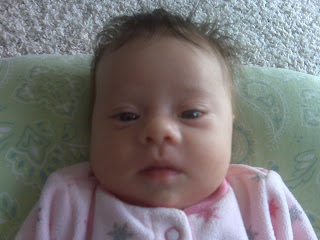 Claire has discovered pockets, and she LOVES them.  She looks pretty darn cute with her hands buried deep inside them, but the combination of pockets and a new walker is just asking for trouble! 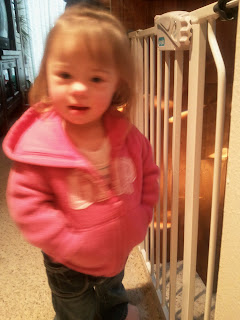 If you haven't read The Human Bobby

by Gabe Rotter, you should.  Super fast read and a whole lotta crazy going on.  It's one of those books that I've had rolling around in my head for the past few days since I finished it.

For more Seven Snippets, visit Bringing the Sunshine!
Posted by Melissa at 10:00 PM