Prenatal Testing After Down Syndrome

Share
When I was pregnant with Claire we debated on having any prenatal screening.  In our area first trimester screening isn't offered, so the first time any testing was mentioned was the second trimester blood work.  My doctor mentioned that at my next appointment they would take blood.  I informed her that I was undecided if we were going to do the testing.  She said she preferred to have it done because it can give an indication of problems like preeclampsia and IUGR, in addition to screening for Down syndrome.

I went home and we talked about it for the next four weeks.

In the end, I had the blood work done, and it came back with elevated risk (1/80) for Down syndrome.  This test led to extra ultrasounds, NSTs, and eventually prenatally diagnosing Claire's heart defect.

It also led to a stressful and worrisome pregnancy.  My doctor, more so than the high risk doctors, seemed to be looking for problems.  And if you look hard enough, you can likely find something wrong.

For us, there were both good and bad outcomes of the screening.

I am very thankful that Claire's heart defect was diagnosed prenatally.  We were able to change delivery plans, and she was born at a hospital with a NICU.  If she'd been born in our small, rural hospital there is a good chance that she would have been transported to a larger hospital.  And I, recovering from a c-section, would have been left behind.  That would not have been good on this mama's heart.

I am also thankful that the increased risk of Down syndrome (increased to 50/50 chance after her heart defect was diagnosed) gave us a chance to educate ourselves, family and friends.  I wanted the birth of my first child to be a joyful occasion, and it was.  For the most part, we didn't have the uncomfortable silences, the stares.  People, us included, weren't shocked by Down syndrome.  And while I sure there were whispers and comments, we didn't hear them.

My biggest problem with the screening, as I mentioned above, was that my doctor seemed to be looking for problems.  I know she was being cautious for the sake of our baby, but this did not make for a relaxing pregnancy.  We were always having ultrasounds (these I loved!) and tests, and new problems were always cropping up.  I would finally get used to a new "problem", then it was time for another doctor appointment, and some new issue had to be dealt with.  As much as I loved being pregnant, I hated this cloud of doom hanging over us.

So, here we are again, deciding on the second trimester blood work.  And I think I'm even more undecided this time around.

On one hand, we are already classified as high risk.  We will see the same doctors as last time for a detailed level II ultrasound and fetal echo around 20 weeks.

But then again, Claire's heart defect wasn't found until we'd had many ultrasounds, at 29 weeks.

The screening tests aren't always accurate, but even if they are, I don't think I want the "what if" hanging over my head.  I'm not scared of Down syndrome, but Claire has opened my eyes to many other disabilities.  And there are many things I don't think I'm cut out for.  Enter the worry I don't want in my pregnancy.

Hopefully that doesn't sound hypocritical.  I didn't think I was cut out to be a parent of child with Down syndrome either, but we are good.  I know I will be able to take on whatever challenges may come our way, but that doesn't mean I want to worry about that for the next five months.

So, with writing all of this out I am leaning towards no second trimester blood work. My next doctors appointment isn't for ten days though, and I'm sure I will change my mind a hundred times before then.

Because I'm curious, what did you (or would you) do for any subsequent pregnancies?

And just because I hate posting with no pictures, one of Claire before the weather turned COLD. 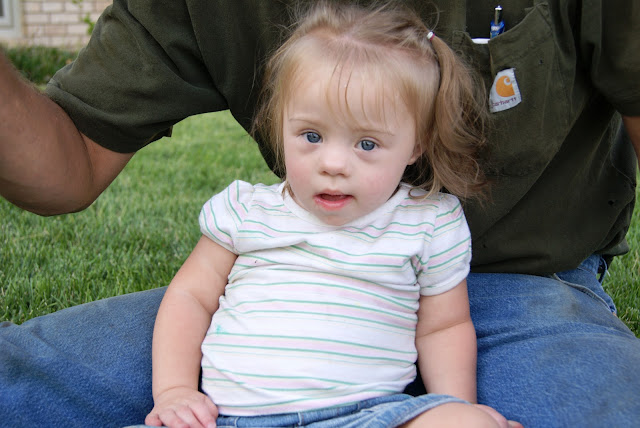