Share
First of all, fellow bloggy peeps...I miss you!  I've gotten behind on both reading and commenting and I feel so out of touch.

This past weekend we got to meet Rachel Coleman of Signing Time fame.  We are all huge fans and when we found out she was going to be in Denver, we knew we wanted to be there.  The show was held in a beautiful park.  The park had tons of water for the kids to play in, and if we'd known, we would have come better prepared.  There were both fountains and a lazy river type water feature.

It was HOT.  We covered Claire in sunscreen and fed her (and let her spill all over herself) tons of water.  I felt so bad for Rachel in her sweater though.  The poor girl had to be just miserable. 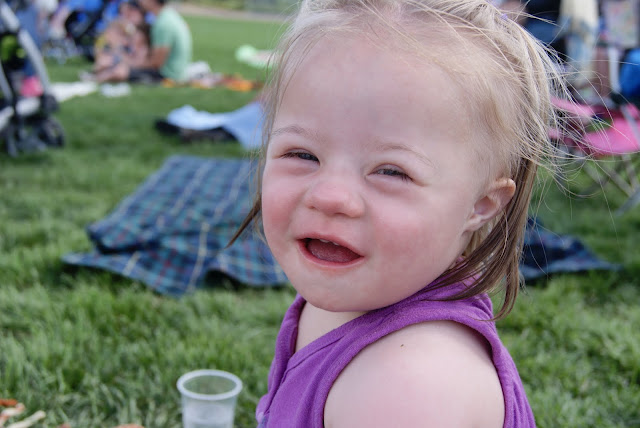 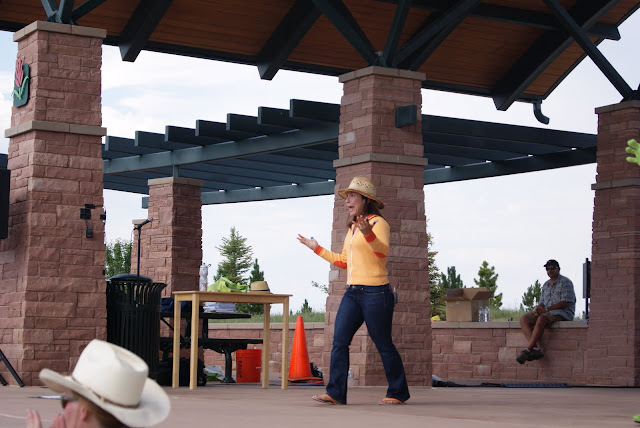 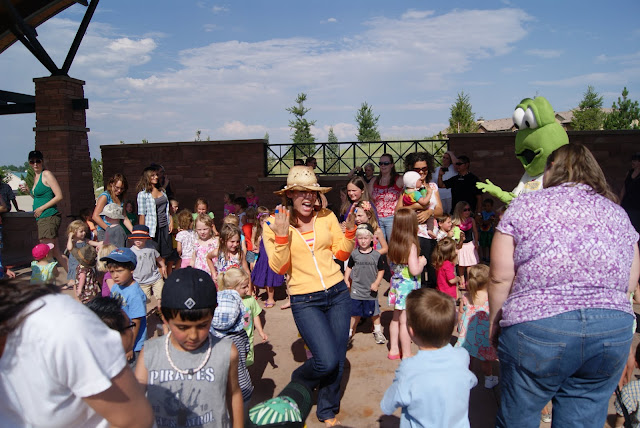 During Turtle Rock Rachel accidentally invited everyone up on stage.  She went with it and everybody had a great time dancing around. 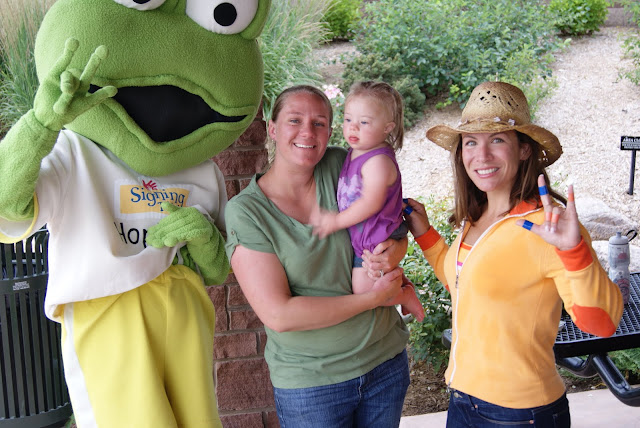 After the show we got to meet Rachel and Hopkins.  Claire was not a fan of Hopkins and kept glaring at him over my shoulder.  My camera was on some strange setting and this was the best of the pictures.  Some of the ones with Rachel, Claire and I would have been cute, but they ended up totally blurry.

*****
After the Signing Time show we headed to the farm to "help" with wheat harvest.  This year harvest was very late due to all the rain we've had this spring.  Claire got to climb into the combine with her uncle, but was pretty unimpressed with the whole process. 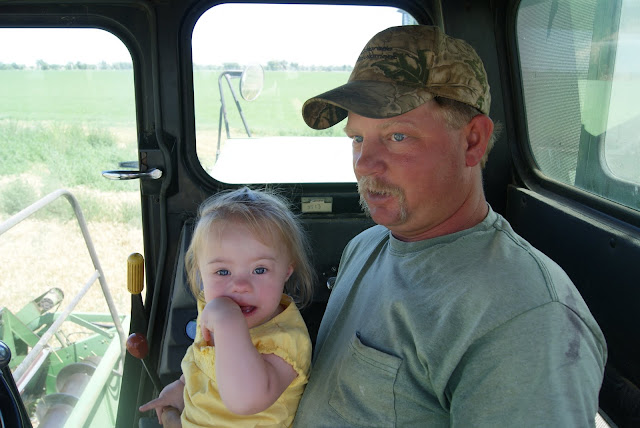 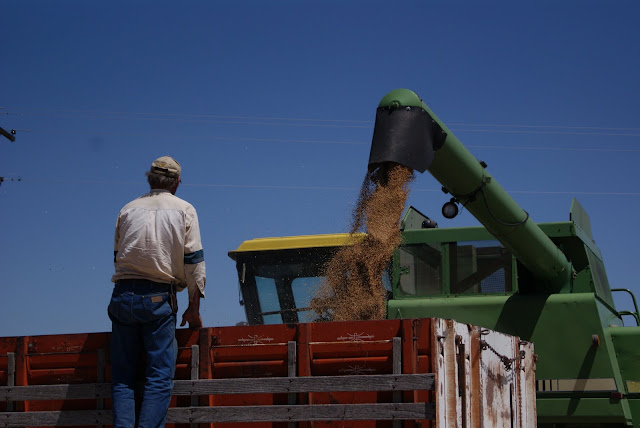 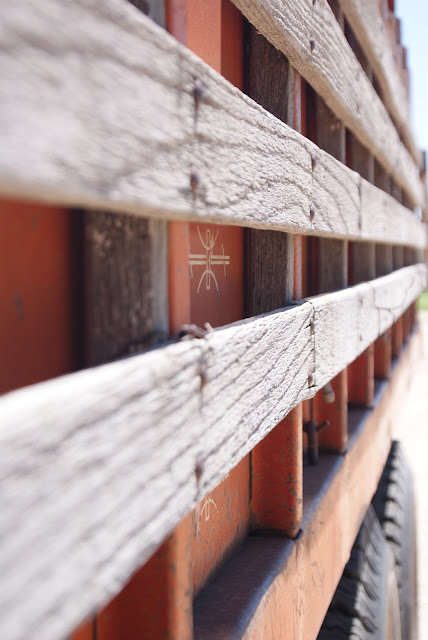 Claire preferred the mower to the combine.  Daddy let her drive, and she was happy to practice her car noises. 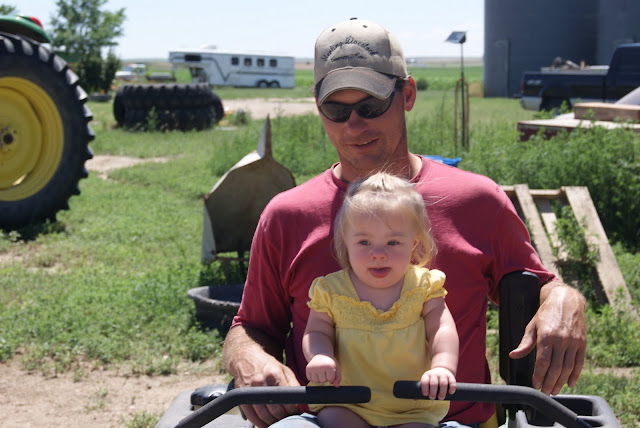 *****
Claire turned 18 months last week, and our calendar is full of all of her appointments.  Today was her well baby and she weighed at a whopping 21 lbs 5 oz.  Next week is her blood work and eye appointment.  We were supposed to go back to her ENT too and have her tube checked, but her dr was able to see that it is clear and open, so we're going to skip that one.  After we get all those appointments completed we'll head back to the Sie Center to make sure everything checks out.
Even though Claire isn't toddling, she feels like a kid, not a baby anymore.  She is such a little sponge.  And she is constantly on the move.  The only time she will settle down and snuggle is when she is very tired.  These quiet times are the best.  She tucks her arms in and just melts into your side. 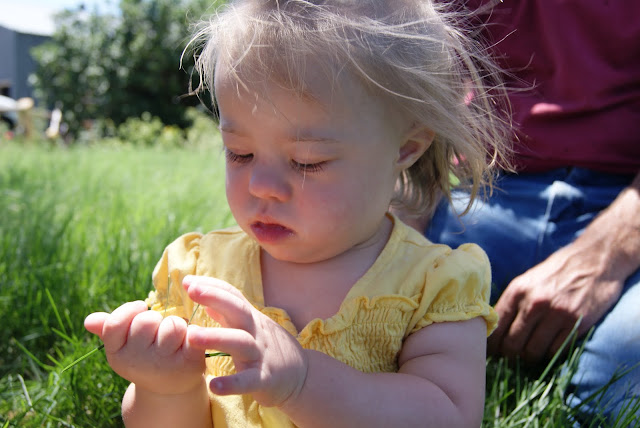 This handful of grass didn't end up in Claire's mouth.  Which may sound silly, but I keep hoping we are reaching the end of that stage.  And then she finds paper, or cardboard, or anything resembling paper, and she can't get it into her mouth fast enough.  Maybe I need to feed her more fiber...
Claire's new favorite sign is cracker.  She signs cracker from the moment she wakes up until she falls asleep.  While I know she loves her goldfish crackers, I think part of the appeal is that the signing actually does something.  She was like that when she learned to sign milk too.  She didn't really want  a drink, but loved that she got something from us.  So, I keep telling her she's doing a great job signing cracker, but unfortunately, that's not what we're having for breakfast.
Other than that, things are good.  Just busy and good.
Posted by Melissa at 12:24 PM