Share
A week ago Friday we headed to Denver for another round of appointments for Clarie.  I had requested an upper GI and swallow study to (hopefully) rule out reflux and aspiration.  Claire has been arching her back near the end of her bottles, leading me to suspect reflux, and coughing and choking other times when she drinks, which was why I wanted the swallow study.  We had originally scheduled the appointments with the Children's hospital, but it was going to be over 3 MONTHS before they could see her.  So, we switched back to the hospital where she was born, where they recently opened a children's hospital too. 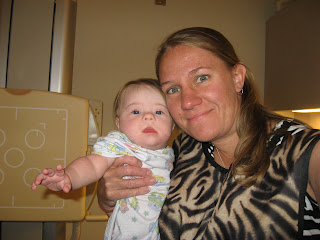 We arrived at radiology and started with the upper GI.  This test needs to be done on an empty stomach and the timing worked out perfect.  Claire napped the whole way to the hospital and was awake and looking for a bottle. I didn't know how she would do with the test (laying on a hard table, flat on your back drinking a bottle), but she did great.  They started by having her drink about an ounce.  The radiologist took pictures almost continuously as the barium made its way to her stomach.  Claire was then rolled onto her side, and we waited.  They needed her stomach to start emptying before they gave her any more.  It took about 10-15 minutes, and this was the only part of the test that she didn't like.  She was very unhappy about being held in place on her side instead of rolling all over.  To help pass the time we talked, and sang (badly), and even got the paci out, which she never takes. 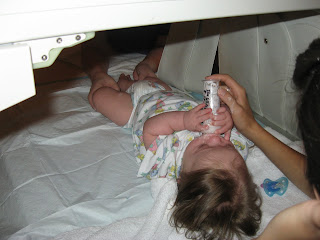 Once her stomach started emptying they filled her belly up.  She drank about 5-6 oz of barium, which is about a typical bottle for her.  While she did great with the barium, she had it EVERYWHERE.  There was so much pooled under her neck that you could easily see her neck crease on the x-ray.  (You could see her teeth on the x-ray too.)  Before her belly was even full she started to reflux.  You could see the line of it travel up her throat, and she was arching like she does with her bottle.  So, while not the outcome I'd hoped for, it was what I expected.  We got her cleaned up and into a new gown for the swallow study. 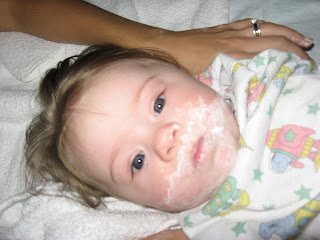 The swallow study started with BM and a little barium added.  She took the bottle well, and it was after about 20 swallows that she aspirated.  It never even fazed her though, no coughing or choking at all.  We then thickened the milk and tried again.  This time she didn't cooperate.  She didn't drink much, so we switched to the purees.  Once again, she just took a little before refusing.  We couldn't get her to drink the un-thickened milk with the preemie nipple at all.  So, we know she's aspirating, but since we couldn't get her to drink much of the thickened milk, how much to thicken is a bit of a guessing game.  Right now, it's less than nectar thick, but she's still coughing a little on occasion.  We are using a powder thickener, and now that I know that the milk needs to be fairly warm, it's mixing in much better than the first time we tried it.  We go back in about a month to do a follow up study and make sure everything still looks good. 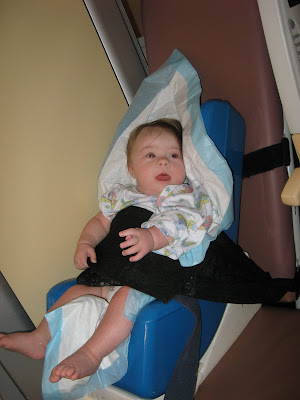