Share
Today, I'm going to celebrate a couple of my milestones, instead of Claire's!

Ten years ago today, I started working for an insurance agency, and while I enjoy my job, I never really figured I be in the same place for ten years!  The anniversary kind of surprised me since we'd been so busy with Claire's surgery, but now that I think about it, it almost wouldn't surprise me if I'm there for another ten years.  We don't have any plans to move, and in a small town like ours, there really isn't any where else I'd rather work.  It's a small office and it's been pretty much the same staff for all ten years.  After this long we're not just co-workers, but friends too.

While ten years at a job is impressive, I'm even more excited about my 3000 ounces...of breast milk in the freezer! Claire has never nursed.  She's always had a great suck, but wouldn't latch well.  I could get her latched and sucking for only a few seconds before she'd let go.  The doctors really wanted her to gain weight well, and with her OHS looming, pumping was the best solution for us.  I'm very thankful that I've been able to exclusively pump and provide her with milk, but man, it's a lot of work!  I could have done without the extra steps of pumping and washing bottles.

My original goal was to pump for six months, and I've made that.  The milk in the freezer should get me through about three months, and now my goal is to get Claire through her first year on BM.  While I'm looking forward to the end of pumping in the next few months, I'm almost not sure what I'll do with another three hours a day!  ;) 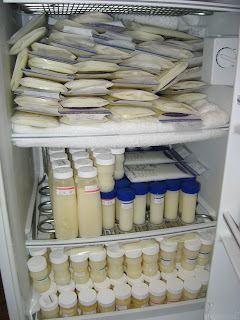 This small freezer in our house held all of the small bottles from her NICU stay when she was born.  I've used most of them up since she'll be six months old next week.  We have more space with the small bottles gone, but we did have to purchase another chest freezer to hold all the milk!
Posted by Melissa at 5:48 PM