Share
On Friday we had a busy day of appointments for baby.  We didn't do the 20 week anatomy scan with our OB as we knew we wanted a more detailed ultrasound.  We also waited until 22 weeks so that we could check out baby's heart at the same time.

I had very mixed feelings going into the appointments.  I wasn't really nervous that the doctors would find anything.  With Claire, I always had a feeling that something was going on with her, and I've never felt that with this baby.  But at the same time, I'm not really sure what to do with a typical baby.  Sounds crazy right?  Everybody worries about having a baby with Down syndrome, as I did with Claire, and now a typical baby freaks me out a bit.

We started out with the ultrasound.  This was the same group of perinatologists that we saw with Claire, and I've always liked and felt comfortable with them.  The tech got caught up on our history, asked how Claire was and commended us on continuing with our pregnancy.  She said most people wouldn't have done that.  I responded that most people would have missed out then, as Claire is awesome.  I always wonder how people take these comments.  If they think that I'm just saying that because she's my kid and I have to, or if they can tell that I really mean it.

We gave our usual warning that we don't want to know sex of the baby and then got started.  This tech moved a little faster through the measurements than some of the others we've had.  Maybe she had more practice, or maybe it was that everything was measuring where it should be and she didn't double check herself as much as they did with Claire. She spent a lot of time on baby's heart, but said it looked structurally sound.  When all was said and done, baby is growing perfectly.  S/he is a few days a head of schedule and estimated at 1 lb 2 oz.

When the doctor came in (not the one I'd scheduled with, she was called out) he started out by mentioning that he noticed we declined screenings.  He went on to offer the new MaterniT21 test.  I declined again.  We are not concerned about Ds, and with no markers on the ultrasound we are even less concerned now.  He took a quick look at baby, mostly the heart again, and said that everything was good.

We go back at 32 weeks for a follow up ultrasound as I'm hoping for a VBAC, and none of the hospitals in our area do them.  They will make sure there's no reason I can't do one, and then we'll figure out when Claire and I have to move up closer to the hospital.  None of the doctors are comfortable with us being 2 hours away.

Since the ultrasound looked perfect the echo was a bit anticlimactic.  I really like the echo tech as this office, even though we don't see her often.  She's done both of our fetal echos and a couple of other echos for Claire.  The echo took about an hour and we chatted through the whole thing.  There wasn't the scared silences like our last fetal echo.

After the echo was done with met with Claire's cardiologist for literally five minutes.  He said the structure of the heart, all of the vessels and the squeeze of the heart are all perfect.  There is no need for us to come back, not even after the baby is born, unless I get nervous.  We aren't planning on any follow up echos for baby, but will be requesting a pulse ox test for him in the hospital.  It's such a quick, painless way to rule out congenital heart defects that it will be done.

So, all is well with baby!  I am a bit sad that I won't have all the ultrasound pictures with this baby that I did with Claire, but at the same time, it's awfully nice not to have to fit more appointments into our full schedule. 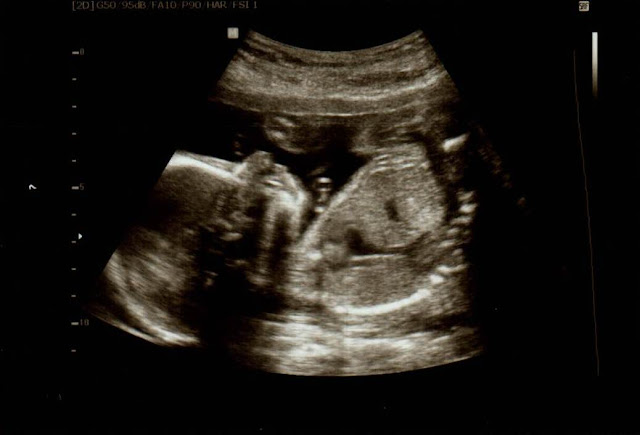 Email ThisBlogThis!Share to TwitterShare to FacebookShare to Pinterest
Labels: Baby #2