Share
While I never officially committed to the 31 for 21 Challenge, I *thought* this might be the year I would actually complete it....and then Claire got sick.  At first it was just a cough and a runny nose, then a bigger cough, more congestion, 4 days of fever and an ear infection.  We spent days just snuggled up on the couch.  She finally felt well enough to go to daycare for a few hours yesterday, but that little bug meant I didn't get on the computer for days.  Oh well, there's always next year, right?

I stayed home with Claire on Monday, and Darren was home with her Tuesday. Tuesday was her doctor appointment, which is not a job that Darren is used to doing.  I had to make sure he knew which door to go in, when the appointment was, and to remind him which pharmacy we used.  Even with all of those reminders he called me mid morning because he'd already forgotten what time the appointment was. 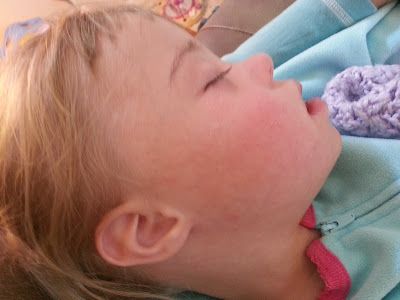 I dropped Claire's antibiotics by the house while she was napping so that we could get them in her once she woke up.  She'd been resisting when I'd given her motrin for the past couple of days, so I knew the antibiotics were going to be a battle too.  Not long after she woke up I got a call from Darren.  He said that he'd tried to give her the antibiotics, but she wouldn't take them....

I'll spare you the details, but the antibiotics are going down, and she is finally feeling better.  Today is her first full day back at daycare, and I hope she does well.  She's still been pretty worn out by the end of the day.

Email ThisBlogThis!Share to TwitterShare to FacebookShare to Pinterest
Labels: 2012 31 for 21, Claire, Darren