Owie (The Things You Learn at Day Care)

Share
Even though the calendar says summer is still weeks away, the thermometer says summer is here.  Days of temperatures in the 80s and 90s means the summer clothes are out.  Skirts, shorts and tank tops make up Claire's wardrobe these days.

Exposed knees come with the cute summer clothes.  Claire got her first scuffed knee of the summer last week.  Nothing major, just your usual road rash.  It never really bothered her but every once in a while she'd point to her knee and sign 'hurt'. We'd give it a quick kiss and all was well again. 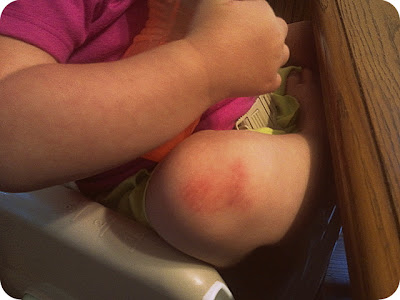 A few days later she came home from day care saying "owie".  This wasn't a word we'd worked on, but it was said just as clear as could be, albeit with a very dramatic pronunciation.  Owieeeeeeee.

I don't usually encourage her to be so dramatic, as a week old scraped knee obviously doesn't hurt anymore, but I can't help asking her to say owie over and over.

Surely putting all those sounds together counts as speech therapy, right?
Posted by Melissa at 10:11 AM

Email ThisBlogThis!Share to TwitterShare to FacebookShare to Pinterest
Labels: Claire